On Thursday, the U.S. Department of Commerce announced that the City of Germantown has earned a 2019 Malcolm Baldrige National Quality Award. The City is one of only four municipalities nationwide to have 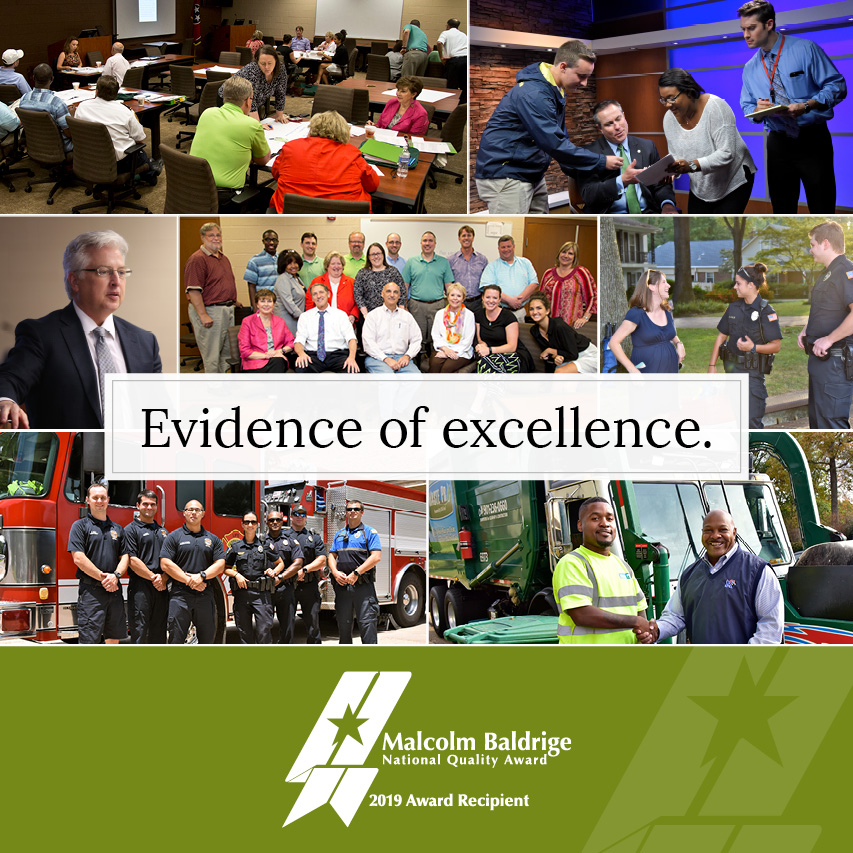 ever received the award. A presidential-level honor, the award recognizes exemplary U.S. organizations and businesses that demonstrate an unceasing drive for radical innovation, thoughtful leadership and administrative improvement. The award was developed in the late 1980s by the Department of Commerce to facilitate competition among U.S. companies. The award is the highest level of recognition for performance excellence that a U.S. organization can receive. Achievement of the Baldrige National Quality Award sets Germantown apart as “world-class.”

The most significant impacts of the award are those that affect Germantown as a community. While the Baldrige Performance Excellence criteria are not prescriptive, the framework forces organizations to focus on customers, culture and performance improvement through measurement. By aligning the City’s work along these themes, the City’s Baldrige journey, which began in 2010, has benefitted Germantown residents, businesses and visitors in the following ways:

Germantown Forward 2030. Residents are invited to influence the strategic direction of the place they call home. To ensure a sustainable future, all City work is guided by the resident-created Germantown Forward 2030 strategic plan. The eight-step strategic planning process was led by a 30-member steering committee appointed by the Board of Mayor and Aldermen, with the involvement of 300 residents. To ensure that customer requirements are met, departments conduct customer focus groups every two years to extensively review their impacts on the strategic plan. Each year, more than 200 residents lend their expertise and advice by serving on boards and commissions.

Dual AAA Bond Rating. Millions in tax dollars have been saved. The City of Germantown began using the Baldrige framework just as the 2008 recession started to impact municipalities. Through careful management, alignment of priorities and adherence to strong financial policies, the City maintains the highest possible credit rating from Standard & Poor’s and Moody’s. This has saved Germantown taxpayers millions in debt service over the years and in 2017 allowed the issuance of the City’s largest bond to date. Proceeds from the bond sale made possible construction of the new state-of-the art Forest Hill Elementary School. To put this in perspective, Germantown is one of just 124 cities, out of 19,500, in the U.S. to hold a dual AAA bond rating from both Moody’s and Standard & Poor’s.

Rapid public safety response times. Emergency services respond quickly and effectively, making Germantown one of the safest cities in Tennessee. Police emergency response time has improved from 4.5 minutes to just over 2 minutes since 2011, compared to other cities’ benchmarks of 5 minutes. Police non-emergency response time improved from 5 minutes in 2012 to just over 4 minutes in 2019. Similarly, 911 calls have been answered in less than 10 seconds almost 100% of the time since 2016. The Germantown Fire Department boasts one of the highest cardiac survival rates in the U.S.

ISO 1 rating. Germantown Fire Department (GFD), Water Department, Information Technology and dispatch services have demonstrated they are first-class when it comes to reliability. After several years of intensely focusing on process improvement, GFD has the highest possible rating when it comes to their capacity to respond to and fight fires. It means Germantown homeowners could see a reduction in their insurance premiums. It means residents can rest assured that GFD is well equipped to respond and provide fire suppression when called. And finally, it means businesses looking to open or relocate in Germantown have an even greater incentive to invest here.

A strong tax base. Residential property owners enjoy rising or stable property values and bear less of the tax burden over time. Due to the City’s consistent and successful development strategy, Germantown’s sales tax revenue has been increasing steadily, from nearly $8 million in 2014 to over $13 million in 2018. The commercial tax base revenue has increased by approximately $2 million since 2016 and now represents about 23% of the total property tax revenue.

Net promoter score of 71. A large majority of residents would recommend Germantown as a place to live. Germantown has consistently exceeded the benchmark of 50, which is considered excellent; over 70 is considered world-class. Germantown’s rating rivals well-known businesses, such as USAA Insurance and Ritz Carlton.

Employees strive for excellence. They provide service around the internal motto of “Excellence, Every day.” Core values of delivering service excellence, providing A+ results and leading responsibly have simplified and improved internal culture. The community rating for satisfaction with employee ethical behavior has been above 95% since 2014 and is approaching 100% in 2018.


The Pursuit of the Baldrige.
For the City of Germantown, the quest for quality is an ongoing process, and this recognition is just another milestone in a journey that has been years in the making. “The work that we have done wouldn’t have been possible without the guidance and vision provided by our fearless leader, Patrick Lawton,” said General Services Director Reynold Douglas. “His longevity as Germantown City Administrator and his commitment to ignore the status quo has been invaluable in this process. It is truly an honor to be a part of his team.”

Lawton returned from a conference in 2010 with plans to implement Baldrige criteria as a means to help Germantown weather the aftermath of the 2008 recession. The City quickly became involved with the Tennessee Center for Performance Excellence, the state-based Baldrige program. It took a few years for the City to hit its stride and finally get organization-wide momentum heading in the same direction. Feedback from TNCPE helped identify opportunities for improvement and direct efforts toward systematic change.

The turning point was the Germantown Forward 2030 strategic plan. “We had all been working hard at driving improvement, but GF2030 really put it all in perspective for us,” said City Administrator Patrick Lawton. Soon after, the City launched an online performance dashboard to track strategic progress and Individual Employee Development plans, which tie daily work to strategic objectives. As performance improvement became more of a habit, the term “Baldrige” faded into the background.

“As an organization, we stopped limiting ourselves and using the fact that we are a government as an excuse,” said Budget and Financial Services Director Adrienne Royals. “It’s like one day we decided to be one of the best organizations in the country, and we went for it.” In 2017 the City received the Excellence Award, the top honor from Tennessee Center for Performance Excellence and an unofficial prerequisite for applying for the Malcolm Baldrige National Quality Award.

In 2019, the City set its sights on the national award. A 55-page application was developed covering all seven categories of the Baldrige criteria. Over the summer, a team of highly trained independent examiners reviewed the City’s application and determined that Germantown was worthy of further review. Out of 26 applicants, only 12 received a site visit.

In October, City staff hosted a team of nine Baldrige examiners for a week-long deep dive into City operations. The team interviewed leaders, reviewed documents, clarified and verified their findings from the initial application and visited with employees from across the organization. “I was honored to have been asked to represent the City during a formal interview with examiners,” said Reggie Cash, a Master Technician with the City’s award-winning fleet team. “It felt great to share about our passion for the great work we do here.” Following the site visit, the long waiting period ensued. “We all felt really positive about our visit,” said IT Director Tony Fischer. “We were able to tell the story about the work we do and our talented employees who make Germantown excellent.”

On November 12, City Administrator Patrick Lawton received a call from Secretary of Commerce Wilbur Ross, who shared the thrilling news: the City had achieved its 10-year goal and was being honored with a Baldrige Award. The administration erupted in cheers when Lawton emerged from his office following the call. After a brief celebration, the conversation turned to what would come next: the feedback report. “This is a time to celebrate, but soon enough it will be time to dig into the feedback report and decide how we’ll address our new opportunities for improvement,” Lawton told the team. “This is only the beginning.”

Why Baldrige?
It’s a common question posed to those who choose the framework to guide improvement. The fact is that most municipal governments don’t regularly use reliable data to measure performance. In Germantown, the belief is “if you can’t measure it, you can’t improve it.” Baldrige provides a program and process for driving performance to a higher level. Alignment, efficiency and a focus on priorities are by-products of the City’s commitment to Baldrige. Reaching this level of excellence enables the City to meet customer needs responsibly and ultimately results in being one step closer to achieving the mission of “Excellence, Every day.”

The other common question has to do with the cost of the Baldrige application. The City’s cost for the Baldrige Award was generously supplemented in the amount of $43,100 by the Germantown Area Chamber of Commerce. “The Chamber was glad to help fund the City's Baldrige application,” said Chamber President/CEO Janie Day. “We've seen the great work they do, and honestly, their commitment to excellence helps the Chamber do its job more effectively. We couldn’t be any happier for the City,” she added.

The value of the outside expertise and feedback is estimated as follows:
Approximately 1,000 hours of Independent Board of Examiners team services (at $100 per hour) for application review, scoring, site-visit prep, on-site examination and final report preparation - $100,000
Feedback report development, editing and assessment (approximately 100 hours at $100 per hour including Baldrige team lead, NIST editors and judges panel) - $ 10,000

In addition, professors from Dartmouth College and the University of North Carolina at Greensboro surveyed the 273 Malcolm Baldrige National Quality Award applicants between 2006 and 2011 about the value of the Baldrige criteria on three levels: cost savings, customer satisfaction and financial gain.  They estimated that the benefits of using Baldrige outweigh the overall cost of the Baldrige Performance Excellence Program by a ratio of 820:1. In their report documenting the study, the professors explained that the figure may be on the conservative side. “If the social costs were compared to the benefits for the economy as a whole, the benefit-to-cost ratio would be considerably higher,” they wrote.